Dashcams may be known for the protection they provide while on the road, but what many don’t realize is that they can be helpful while parked as well.

Some dash cams have capabilities that allow them to act as car security cameras when you leave your vehicle unattended, providing you with footage should your vehicle be broken into, vandalized, or stolen.

These car security cameras aren’t only rolling while you’re standing still, however, and while you’re moving they act as your record keeper taking video of all that is happening on the road.

Not all dash cams work as car security cameras, however, and it will take a little research to find just the dashcam you can use to fit this need.

Many dash cams begin recording when the movement of the car is detected, but only some keep taking video while it’s put in park and you leave in the area.

Researching dash cams that act as car security cameras can seem a bit intimidating with all that is available on the modern market, but having a place to start makes the journey that much easier.

A few dash cams that also act as car security cameras include: The unit comes equipped with Intelli-Batt Anti Battery Drain technology that allows it to keep recording footage when necessary without needlessly draining the battery and running out of power.

In addition to the footage found in-car security cameras, the Falcon Zero TouchPro HD also offers basic dashcam specifications like a G sensor, automatic looping technology, double docking stations for use in 2 vehicles, and a Wide Dynamic Range for clear video in all light conditions.

A simple mounting bracket allows the Falcon Zero TouchPro HD to be mounted in any type of vehicle in a matter of seconds. 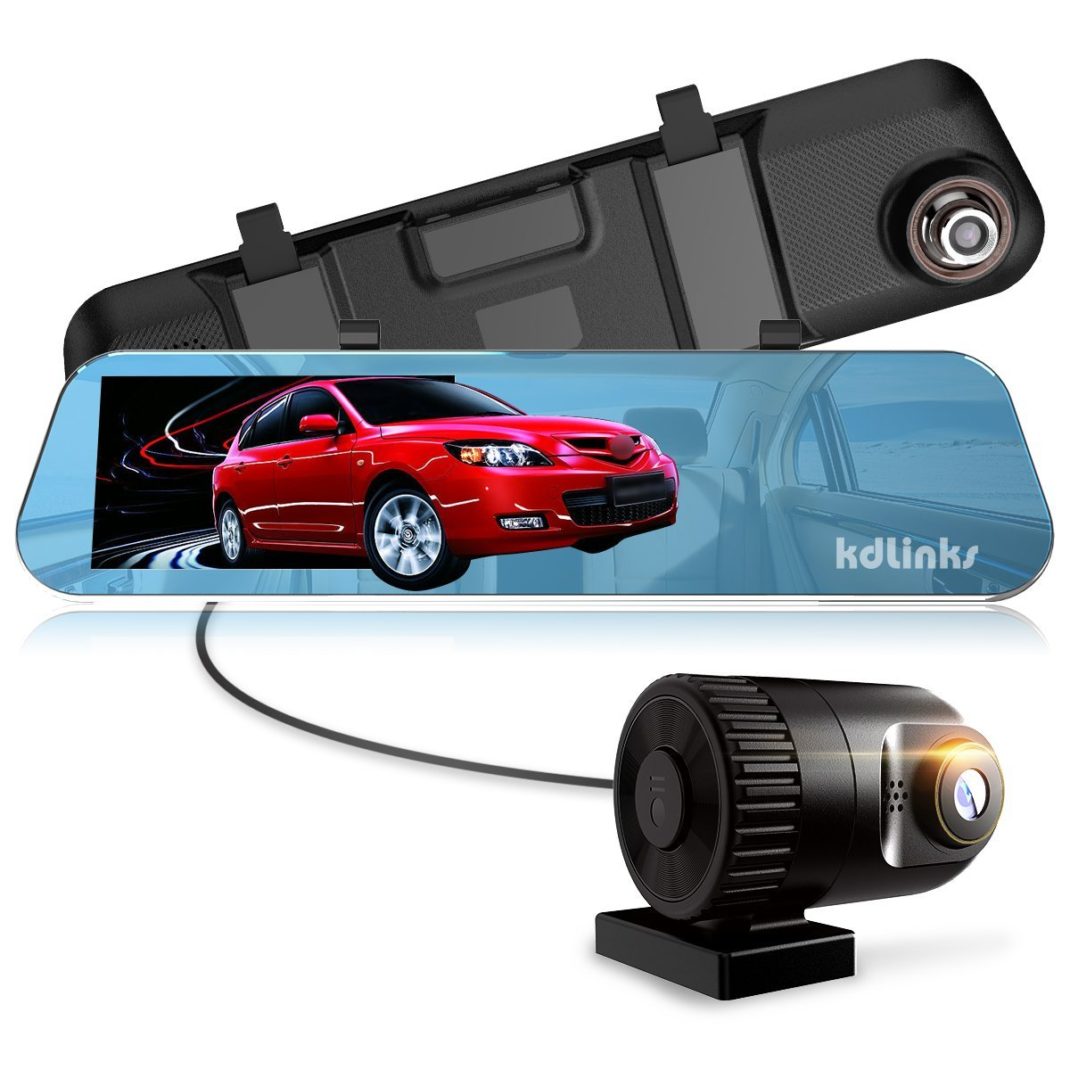 The KDLINKS R100 is priced at just under $200, so similarly to the Falcon Zero TouchPro HD, and also offers a parking mode necessary in-car security cameras.

Much like a home surveillance camera or a trail camera, the KDLINKS R100 begins recording when it detects movement near the vehicle from a close distance around the car.

If a person, animal, or object comes close to your vehicle, the KDLINKS R100 begins taking short recordings to capture whatever may be moving too close.

In addition to parking mode, the KDLINKS R100 offers a front and rear dual camera mode to capture footage in your car’s entire surrounding area, superior night vision technology, and a one-year warranty.

Another notable feature to have in-car security cameras, the KDLINKS R100 also supports 64 to 128GB micro SD cards to save hours and hours of surveillance footage. 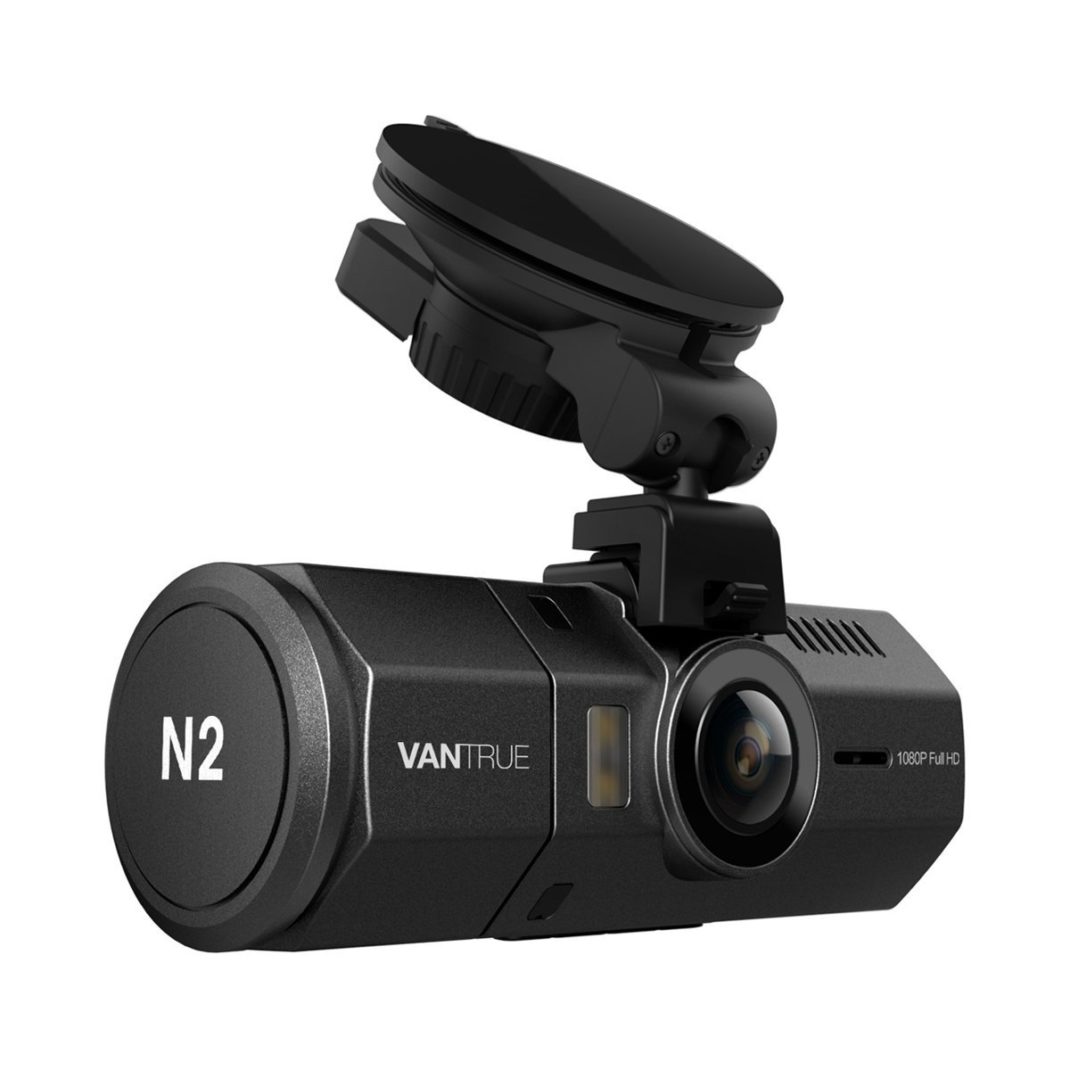 The most affordable of the bunch, the Vantrue N2 requires a small price to pay for car security cameras offering unlimited footage protection.

The small size of the Vantrue N2 allows it to be one of the stealthier car security cameras offering discreet protection while you’re moving or while you’re parked.

The Vantrue N2 can be automatically switched to parking mode, where it will begin taking time-lapse photographs of anything coming within 33 feet of your vehicle.

In addition to the features found in-car security cameras, the Vanture N2 has impressive regular dashcam features offered as well.

Whether parked or in motion, the Vantrue N2 provides affordable and convenient clear footage.

You may not be able to find available Vantrue N2 anymore. But never fear, here comes the Vantrue N4. This dashcam offers three-channel (front, inside, and rear) dash cameras. Yes, this is a triple channel dash cam with the following specifications:

All three cameras can monitor the front, rear, and interior of your vehicle simultaneously, making it the perfect dashcam to protect yourself from potential liability issues as well as accidents.

But enough of those amazing video quality and recording features. We’re here to find the best dashcams that can act as security cameras while you’re parked, right?

So here’s what this new Vantrue N4 can offer you.

First, it has a 24-hours motion detection or collision detection parking monitoring feature. What does this mean?

The motion detector means that the dashcam will be on standby mode and wake up to record once the front or inside camera detects movement. This motion detection parking mode is also energy-saving since it only activates upon movement detection.

Meanwhile, the collision detection activates if an impact is detected while the car dashcam is off. As soon as the collision happens, the dashcam will automatically be turned on to record the impact. The three-channel dash cam should be connected to a hardwire kit or external battery for parking mode.

It is also heat resistant and powered by a supercapacitor instead of lithium batteries. Supercapacitors are built to survive extreme weather conditions from 14°F to 158°F, so this dashcam will be Ideal even in hot weather areas such as Arizona, Florida, Texas. Also, it works for extremely cold areas, too. It also gives a longer lifespan than lithium-ion battery dashcams.

Its variable sensitivity G-sensor is a reliable witness for accidents, whether you’re parked or moving. It auto-detects sudden shake/collision and emergency locks the footage to the event folder following impact. In case your memory card is already full, the loop recording feature will overwrite the oldest file so the accident can be recorded no matter what. You can also opt to buy an optional GPS to track route, location, and speed.

Meanwhile, if you’re worried about incidents happening at night or in low lighting conditions, its infrared night vision, combined with the high-performance Sony STARVIS CMOS sensor can increase exposure automatically in dark situations. So you will be able to capture clear video footage.

It has a big six-glass lens observing the road ahead (F1.4 aperture) and the rear (F1.8 aperture). At the same time, the four IR LED lights facing the car cabin can accurately capture the driver and passengers even when the cabin is completely dark.

What To Look For In Car Security Cameras Car security cameras should first and foremost be secure, which means you will want some semblance of stealth in the design involved. If car security cameras are too readily visible from the outside of the car, it may have a higher likelihood of the unit being stolen or broken should vandalism or a break-in occur.

Also, car security cameras should offer substantial memory capabilities to allow you to capture long periods of footage without being deleted due to auto-loop recording features.

This means that when you’re looking into car security cameras, a good bet is to opt for a unit that provides at least a 32GB micro SD support capability to allow you hours of seamless footage to review.

Battery capabilities or a simple power source should also be researched, and this is done to ensure that your car security cameras won’t succumb to a dead battery before taking any footage that needs to be taken.

VIDEO: What To Look For When Purchasing A Dash Cam

Using car security cameras is a smart choice in a variety of situations.

If you’re using a parking garage or parked on the street, for instance, that doesn’t offer surveillance you can always keep track of your vehicle and just what’s going on around it.

If another vehicle bumps yours, someone attempts to get into your vehicle, or your vehicle is vandalized, you can simply review your car security camera’s footage and determine exactly what happened, when it happened, and what caused it to happen, providing you with much-needed evidence should you take the case to court or the police later on.

While not all car cameras act as car security cameras, this is something worth looking into for those who would like this extra benefit from a car camera system.

These car security cameras still provide all of the same benefits as your average driving car cam, but also provide this same protection for your vehicle, and peace of mind for you, while you’re far away from it.