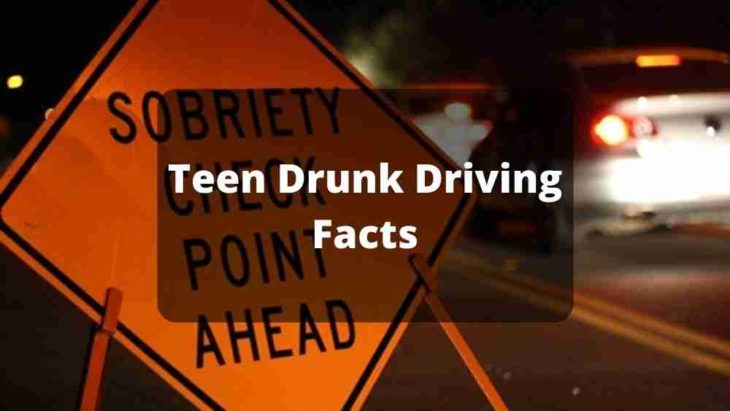 Teenagers drinking and driving is an unfortunate reality. There’s no reason pretending it doesn’t exist. Here are some depressing quick facts that new drivers (and parents) should know (source)…

The good news? Drinking and driving among teenagers has gone down by 54% in the past 2 decades.

1. Why Teens Drink And Drive

The teenage years often lead to an unfortunate combination of things that lead to an increased drinking and driving rate. Sometimes the newfound freedom is too much to handle responsibly and other times it’s as simple as peer pressure.

Since teens usually have a low tolerance for alcohol and since they are also inexperienced drivers, all of these factors coming together creates a very dangerous situation. Remember when you were a teenager and had “nothing bad can happy to me syndrome?” Some teens have it worse than others.

The perceptions that teens have on drinking and driving start at a young age. While it is widely known that drinking and driving is dangerous, teens will often form their opinions based on what they’ve personally experienced in their lives, not necessarily what they’ve heard. If, for example, a teen has frequently seen a parent drive after consuming alcohol, that may normalize the behavior.

Most teens don’t start drinking and driving by being drunk. Often, it starts by them having just a drink or two. After they get comfortable driving after just a couple of drinks, they will drive buzzed. At that point, their decision making abilities worsen, which gradually leads into getting drunk and driving.

One drink is too much for a teen to drive (from both a safety and legal standpoint), but if the behavior of “just having a few drinks” and then driving is an accepted behavior in their household, that mentality could slowly lead to poor choices themselves.

Every year, the lives of teenagers are lost due to drunk driving, even though they weren’t driving at all.

The sad reality is, many teens often find themselves in situations where they feel trapped and forced into getting into a car with a drunk driver. Sometimes teens feel they have no other choice because they will get into trouble if they call for help, or they might feel pressured for a number of reasons.

It’s important that teens always have someone they can call to get out of situations like this, free from repercussions. Often times, it’s important to work with a family friend or extended family member like an aunt or uncle to act as a confidential intermediary.

While it’s best for teens to never be around alcohol, that just isn’t a viable solution in the lives of most teens. So, at the very least, an emergency exit plan should be discussed and determined before it’s ever a problem.

While it is never ok to drink and drive no matter the age, teen drivers are at a significantly higher risk of injury or death when they have alcohol in their system. Even having a blood alcohol limit below a .08 BAC (legal limit for adults) puts teens at a much greater risk of having a motor vehicle accident.

The reasons behind this are simple. Teens have a perfect storm of inexperience driving, poorer decision making skills, peer pressure, and a low tolerance for alcohol. All of these ingredients combined spell disaster.

The good news is teens are much less likely than adults to drive after drinking, and this statistic keeps getting better.

5. Being Arrested For Drunk Driving As A Teen Is A Big Deal

Many teens are not persuaded by the dangers and risks of possibly hurting themselves or someone else. While all teens are different, many teenagers have a feeling of invincibility and feel like bad things won’t happen to them.

However, the penalties of teen drinking and driving have proven to be pretty effective. Getting arrested for drunk driving as a teen is a criminal offense. Even teens under the age of 18 are often charged as an adult, and their DUI conviction will go on their adult criminal record. Imagine trying to apply for a job as a teen, and already having to explain to potential employers why you have a criminal record?

Teens generally also lose their driving privileges until they are 18, 21, or even longer. Losing that freedom after only experiencing it for a short time is very difficult thing for most teens to deal with.

The days of drunk driving being a “slap on the wrist” are long gone. Being arrested for drunk driving will cost thousands, you’ll lose your license, and you’ll have a criminal record. Not good.

It isn’t all doom and gloom. The best fact on this list is that prevention measures to prevent teen drunk driving is working. Instead of just issuing a full driver’s license to teens, most states now have a graduated driver’s license program.

Most teens under the age of 18 are restricted from having more than one passenger in the vehicle and must abide by curfew laws, among other restrictions. While teens often complain about these rules, they have been proven to make teens safer during the first years of driving, not just with teen drunk driving, but with all aspects of driving.

The best way to prevent your teen from drinking and driving, or riding with a drunk driver, is to educate. Not all teens will listen, but teenage drunk driving rates among high school students have decreased by 54% since 1991.

We’re headed in the right direction! What has lead to this decrease? Graduated driver’s license systems are now in place in all 50 states. This alone has led to a much safer system of licensing new drivers. There has also been a huge step up in education about drunk driving. And finally, stiffer drunk driving penalties have also had an impact. Recent studies have actually shown that the fear of arrest is a bigger deterrent than the fear of an accident. This is true for both adults and teens alike. So instead of preaching safety, you can always preach the criminal element of drinking and driving.

Let’s keep up the good work, and keep lowering teen drunk driving rates. Lives depend on it.